These days object detection models are readily available as online services from the large cloud providers. However, when experimenting at home I prefer not having to rely on online services but instead have local services I can spin up on demand. After a bit of googling I didn’t find anything that exactly matched my needs, so I thought why not just build something myself.

In the following I’ll go through some of the details of the build. All the code is available on GitHub and the Docker images on Docker Hub.

The model I’ll be using is YOLOv3. There are a number of reasons for this:

I won’t go into any details about the YOLO model here, there are plenty of great blog posts out there that do that (for an overview of YOLOv3 have a look here). Instead, I’ll focus on building a dockerized service around a pre-trained version of the model.

Note, that in the following I will not be using the authors original repository for the implementation, but instead a forked version by AlexeyAB which contains a number of improvements. For me, the most notable improvement is the support for Tensor Cores.

Talking to the model

Before we can actually put the service together we need to figure out what pieces we need. First, we need a way to interface with the model. Fortunately, the implementation of the model comes with Python bindings, so it’s fairly easy.

A trained YOLO model is comprised of four files:

If we, as an example, use a model trained on the COCO dataset we can run a detection:

If you have a look at the coco.data file, you can find the file with the list of classes the model can detect, coco.names.

Note, that there is a small annoyance when using the Python bindings. The inputs need to be byte strings and the outputs will also be byte strings, so a bit of conversion is needed.

If we use an example image from the repository, we get the following output (after all the initialization output of the model):

In order to build the API as quickly as possible I use connexion which allows you to expose your Python code as a REST API without adding much code. The first step is to define the endpoints:

Most of it should be fairly self-explanatory. But, essentially, there will be just one endpoint detect where a GET request allows us to pass a URL to a file we want to perform detection on, and a POST request allows us to upload a file for detection. In addition to either the URL or actual file, we allow the user to specify the detection threshold. We can do simple input validation, so in this case we enforce that the threshold must be between 0 and 1. Besides this, the important part is the operationId argument which specifies the Python function that will be called.

Once the functions referenced in the operationId fields above have been implemented and the API definition has been saved as swagger.yaml, it takes very little code to create the API:

If we take a look at the first detection function

we see that it is quite straightforward. It first downloads the image at the URL and saves it to a temporary file. In order to get a unique filename I use mkstemp. It’s not that elegant, but it’s a simple way of generating a unique name. If something goes wrong in the download we send the caller an HTTP 500 error. Next on to the detection. Again if something goes wrong the caller gets an HTTP 500 error. Finally, we return the detection.

If you have a look in my repository you can view the full code. Note two things:

We cannot use the Python bindings in the examples above without the darknet shared library. That’s in itself not a problem, we’ll just build it in the Docker container. But this will give us an unnecessarily large Docker image as we need to have a full development stack. In order to get as small an image as possible we will use multi-stage builds.

We first define a build image:

Our starting point is a plain Ubuntu image where we install build-essentials. We clone AlexeyAB’s repository, set a few options in the Makefile and run make. The critical part here is that we have named the image build. This allows us to reference it later.

Continuing (in the same Dockerfile) we can now define what will be our final image:

An obvious question: Why go through the trouble of installing Python on an Ubuntu image when you can just use a Python image? If we take, for instance, the python:3.6-slim image, it is 174MB. The image above, which is sufficient for what we need, is only 103MB (without libgomp1, wget and darknet).

After having set up the Python environment we then copy the darknet shared library and Python bindings from the build image as well as the configurations for the pre-trained models.

But what about this libgomp1, why is it needed? When I build Docker images it is typically a lot of trial and error. So let’s try and build the image as defined until now but without libgomp1:

We can then create a container and open a shell

and check how the shared library is linked:

As we see libgomp is missing. When copying libraries or executables between images it’s always a good idea to check whether all the libraries it was linked against are present.

Let’s finish up the Dockerfile:

I add the code for the API and install the Python dependencies. Unlike the example above I don’t want to hardcode the model files, but instead pass them through environment variables to the Python code to create a more generic image. Finally, the pre-trained weights are downloaded.

You can build the image yourself, but it is also available on Docker Hub. If we start up a container

and go to localhost:8080/ui we get a GUI where we can test the API: 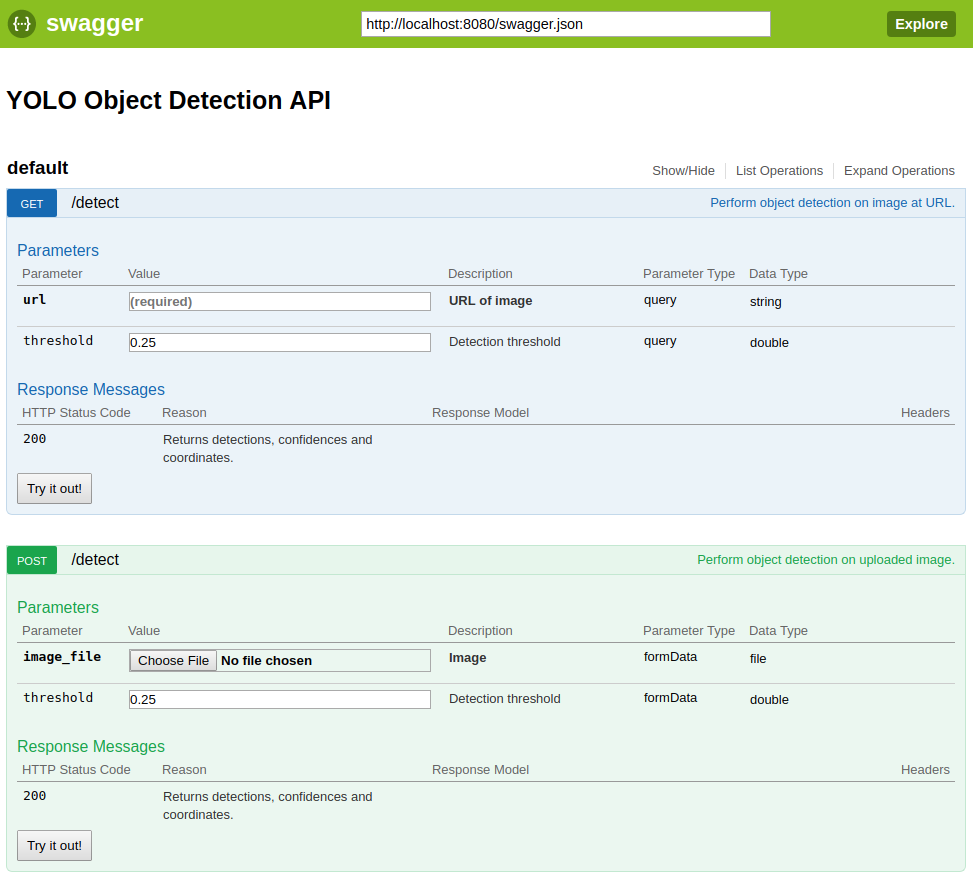 If we try it out with the same example image we used above we get the following result. Note, that it includes examples of how to use the API with e.g. Curl. 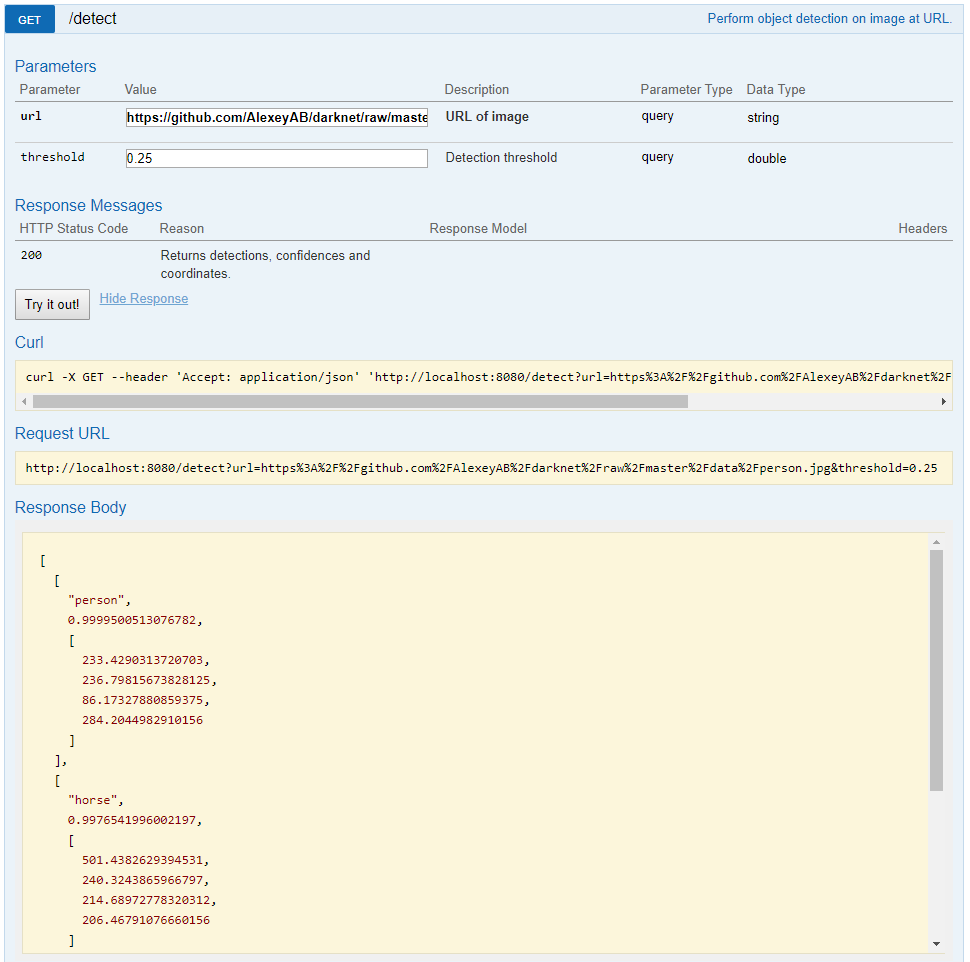 If you look at the Dockerfile in the repository you’ll notice that it is more generic than the example I went through above. The reason for this is that it also includes support for running the model on a CUDA GPU.

When using the CUDA images make sure to use Docker version 19.03 (or newer) and have NVIDIA Container Toolkit installed, then the container can be started by running e.g.: